Evolution of Education in India. Challenges and Improvement Opportunities in Indian Education System 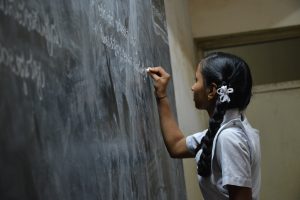 A History of Indian Education system

Indian education system is founded on a rich cultural heritage that laid emphasis on the inculcation of moral and ethical values in the mind and heart of students. ‘Gurus’ of the ancient times reinforced an interactive learning environment which is so highly valued even now.

The interaction between the students and the teachers provided a firm base to the value-based education system. Students had to go to ‘Gurukuls’ for getting education and there they spent the most of their childhood and adolescence to learn the values of life apart from reading and writing. Homes of the Gurus used to be the ‘Gurukuls’ where students were taught about different subjects, languages, values of life, etc.

The ‘Gurukuls’ were considered imperative to attain knowledge and learning. Knowledge was rendered through the three-way process of ‘Shravana’, ‘Manana’ and ‘Nididhyasana’.  ‘Sharavana’ stands for listening to what the teacher teaches. ‘Manana’ signifies the process of pondering over the teachings or lessons. ‘Nididhyasana’ means comprehension and complete understanding of the lessons.

Students did not have to pay fees though they had to pay ‘Gurudakshina’ in return for the contribution of the Guru in imparting knowledge. ‘Gurudakshina’ was a token of respect from a student to his Guru in the form of acknowledgement for the knowledge he had received.

The Nalanda University of Takshila is known for being the first university of the world. The biggest center of learning at that time, Nalanda was established in 700 B.C. Students from different countries used to come here for learning such subjects as medical science, law, astronomy, philosophy, theology, arithmetic and metaphysics. There was a time when about 10,000 students studied in this residential varsity. This university is a perfect example of the quality education given to the students at such a time when other countries were far behind in the field of education.

Modern education system has come long way since its introduction during British rule. It has gone through several transformations and challenges. The situation in the majority of private schools now is far from ideal. Slowly the modern education turned into a money generating business than providing quality education and values to the students.

Modern education system no doubt provides exposure to the students but the matter of concern is that value-based education has been relegated to the background. The main objective of the schools has become to impart information rather than true knowledge. Moral values are given little importance. One of the reasons why moral values have started disappearing from the society is that schools do not attach any importance to the inculcation of morality among students.

It is not that everything is bad about the modern education system. Children belonging to far and wide study in the same classroom and share bonding with one another. It is their interaction with one another that enhances their personality. But it is also important to mention that a sense of brotherhood and bonding was also one of the major characteristics of the old education system of India.

The relationship between a student and a teacher has undergone a radical change. Earlier students stood in awe of their teachers but now students have learnt to speak their mind. Students have now become bold enough to say that they are not in a mood to study or they could not understand a topic as the teacher did not teach it well. Teachers are asked to teach the same topic twice or thrice so that the students understand it fully.

Internet has revolutionised the entire education system. A student can understand a topic using various source on internet like Youtube, websites, forums etc. Internet has opened another door to acquire knowledge for the students who are not been able to grasp it thoroughly in the class. This is a major advantage for the students now.

In addition to the classrooms, laptops, computers and smartphones are being increasingly used for the purpose of teaching though it is also to be accepted that these electronic gadgets have done more harm than good to the students. The majority of the students misuse the internet and electronic gadgets rather than using these devices for their benefit.

There has been a big change in the education system over time.  There was a time when students studied in ‘Gurukuls’ and sat under a tree while the teacher taught. This changed into classrooms with black boards. Projectors and computers came in use for teaching in the smart classrooms.

The system of education has changed considerably with teachers, students and even classrooms going through a mammoth change. But there is one thing that has remained unchanged. It is the purpose of teaching which has always been imparting knowledge to the student by the teacher.

Challenges in The Indian Education System:

With the passage of time, innumerable problems have crept into Indian education system. People may claim to be more civilized but they in reality have lost touch with morality. This gets reflected in schools and colleges too. Morality has no or little place in the curricula now in days. Focus has been on learning new subjects but morality has disappeared from the educational institutions.

Indian education system has undergone a great deal of change from the ancient times to the modern period. When the ancient system of education is compared with the modern system inspired from the British ways, we see countless challenges that needed to be addressed at the earliest because the future of our country depends upon the kind of education we give to our children in schools, colleges and other centres of learning.

The education system has evolved into mere schooling now. Teaching is nothing more than a process of spoon feeding. Students are not given a chance to think. They are told to learn and write what is taught to them. The thrust has been on cramming facts, formulas, dates, doctrines and theories. Creativity and different thinking is not promoted at all.

The curse of tuition classes has worsened the already pathetic situation. It is now considered compulsory to send a child for tuition after the classes. It has raised a question mark on the potential and worth of the teachers. Tuition classes have become so integral a part of the life of a student that if someone is not taking tuition or coaching classes, it is believed that he cannot score good marks in the exams. Even highly qualified students go for coaching classes to crack competitive examinations.

Education has thus become money making business. Some of the teachers do not prefer to teach well in the school and charge a huge amount of money for tuition after the classes.

Another major problem is that education has come to be equated with employment. People want their children to be educated so that the kids get white colour jobs after completing their education. Here it is to be understood that education changes the behaviour of a person and it makes one a good human being, It should never have employment as its goal otherwise education will lose its real meaning.

Unemployment has emerged as one of the biggest challenges in present times. Though literacy rate has gone up considerably during the past few decades, unemployment too has emerged as a major challenge. Many a time it is seen that a person is not able to get a suitable job despite being highly qualified. There must be something seriously wrong with the present system of education because schools and colleges seem to have become factories churning out unemployed youth. The percentage of employed youth is too low to be proud of.

Quality of education has gone down

Despite all our claims of having made a lot of progress, it is to be accepted that the standard of education has gone down. The focus of the government has been on sending every single child to the school. This move is appreciable, but it has done more harm than good. Pass percentage has increased considerably or rather no child fails now and is allowed to sit in the next class even if he has fared badly in the exams. Grading system is the brain child of countries like America, England and France. It might have been successful there but in India it has failed miserably. This system too needs to be overhauled as per the requirement of our country.

Due to high fee structure and donation system, the affordability of quality education has become a challenge for financially weak people. Though some of the governments have few financial assistance programs, getting admission in some of institutions has become only a dream for poor people due to their financial unaffordability.

It is a harsh reality that even 70 years after attaining independence, education system in India seems to have favoured a section or class of people. The government may have framed innumerable policies and plans but their effective implementation has been far from satisfactory.

Lack of infrastructure in education institutes

It shocking to see so many educational institutes operating out of small buildings without any play ground and lab set up. Students hardly gets opportunity to participate in sports and physical activities due to lack of ground. Also, there is no scope for experiential learning, performing practicals because most of the institutes are not equipped with necessary labs.

Children living in remote or backward areas are still not sent to school by their parents either because there are no schools nearby or because parents being themselves illiterate do not deem it fit to educate their kids.

Education should be made accessible to one and all. A child living in a remote village has as much right to get a good education as the one living in a modern city. There is an urgent need to provide free and quality education to the children of rural areas

It is also seen that a person having the means and resources can give a good education to his children whereas a person who finds it difficult to make both ends meet cannot educate his child properly. Education has to be accessible to all irrespective of their class, caste and religion.

Computer education is the need of the hour given the advancement in the field of Information Technology and Science. Knowledge of computers is a must for any job and if free computer education is not provided to students belonging to both urban and rural areas, they will lag behind in their respective fields.

There is also a discrimination against a girl child who is considered inferior to her male counterpart. This tendency is more marked in remote areas as the parents themselves are not educated. They think that a girl is to be married and there is no need for her to study. This misconception needs to be changed by educating the people of the rural areas.

Opportunities to improve the education system in India

Any system will have areas to improve however good or bad it is. Let us see some of the opportunities to improve the education system in India for the benefit of students.

Do you want Kolb Labs at your school?